The news reports never get easier— like daggers to his soul, twisting a bit more with each instance.

“That’s probably a good description because it does make my stomach sick every time I read about it.” 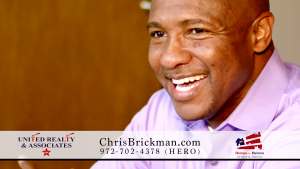 ‘It’, being the seemingly weekly story of a veteran or police officer being denied service by a business in Anytown, USA. Or maybe it’s another viral video of a teacher being beaten by a student inside the classroom.

“It’s a very sad statement about our current culture when so many people promote and celebrate the mistreatment of those who literally put their lives on the line every day to make our country better.”

Within moments of meeting Chris Brickman, it becomes easy to understand why these incidents torment him. Over two decades ago Brickman began a journey, one that would take him down paths and to places not traveled to by many.

“I’ve been to enough other countries to understand how truly blessed we are here in America,” he said.

A veteran of Desert Storm, Brickman knows firsthand the dangers of war and the commitment and sacrifice of those who serve others for a living.

“A lot of the reason I do what I do is that I served in the U.S. Army for twelve years. If it wasn’t for people who are willing to put their lives on the line we wouldn’t have the freedom we have today,” Brickman says with a refreshingly humble heart.

His life experiences are one of the reasons his company, United Realty and Associates became affiliated with a unique home buying program called Homes for Heroes. 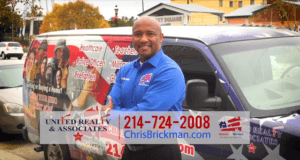 “Homes for Heroes is a program that helps out what we consider to be heroes,” said Jason Bradley, a branch manager for Geneva Financial, a close friend, and colleague of Brickman. “The heroes are people who work in law enforcement, military veterans, those who work in education, healthcare, and firefighters. We help them with the purchase or sale of a new home and we give them twenty-five percent of our commission back at closing.”

“It’s a great program that really helps out the heroes,” says Tracy Aldridge, a United Realty and Associates agent and long time friend of Brickman. Their friendship began as teenagers serving in Desert Storm. And now, they serve those who serve for a living and Aldridge points out, it’s a rewarding role.

“It never gets old, the feeling I get when I help out a hero. To see the look on their face when we present them with a check—it’s impossible to describe that feeling.”

The Homes for Heroes program is about as simple a program to join as one can imagine. There is no fee. There is no mark up in the home price. If you work in the areas of law enforcement, healthcare, education, military or firefighters, you are considered a qualified hero, which entitles you to a check for twenty-five percent of the commission check of the United Realty agent. In addition, when Jason Bradley of Geneva Financial is used as the lender, he will also donate a portion of his commission as well. And it’s not just for the actual policemen, teachers, nurses, firefighters and servicemen.

“It’s anyone working in those fields,” Brickman explains. “So, you could be a police dispatcher, a janitor at a school, or working as an admin at a hospital. Anyone working in the ‘Hero’ fields is considered a qualified hero.”

It almost seems too good to be true, getting a check for twenty-five percent of the commission returned to you at closing.

“We hear that all the time. ‘It sounds too good to be true. What’s the catch?’  Well, there is no catch but there is a check—an actual check cut to our heroes and presented at the time of closing. They can spend it on whatever they like,” according to Brickman whose wears his passion for giving on his sleeves.

“Yes, Chris is a realtor, but he’s more. He’s a servant of the people,” says Alisa Owens, an agent for United Realty & Associates, founded in 2004. Alisa would know. The two not only work together but are engaged to be married. In addition, Owens has her own personal reasoning for being passionate about the Homes for Heroes program.

“My dad served in the Army and he’s a one hundred percent disabled veteran. I heard so many stories about his experiences, about the way he was treated. Every story that he tells me I say to myself, ‘Wow, why doesn’t our country to more for our heroes?’”

“The experience with United Realty and Geneva Financial was outstanding from beginning to the end,” LaJohn says. “Prior to coming to United Realty, I felt a little bit disenfranchised relative to the (home buying) experience. The team Brickman including Jason at Geneva Financial, the efficiency by which they operated, the level of competency in which they operated was simply outstanding.” 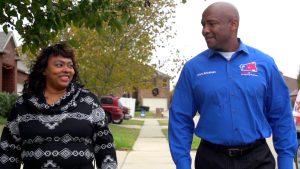 “I didn’t think I would be able to get in a home,” says Tia Padilla, also a military veteran and single mother of three. “He (Chris) made me feel like I was the most important person in the world and that nothing and nobody was more important than me and my kids getting into a home and being comfortable.”

The list of Heroes helped is impressive and the testimonials powerful, some of which can be seen in this video here.  As many people that United Realty and Geneva Financial have helped, Chris Brickman has a realistic viewpoint regarding the troubling current cultural trend.

“Even though we are one hundred percent committed to helping our heroes, it’s still disheartening to see how many people treat our heroes so poorly. However, we want them to know they have a home with us. It doesn’t matter when they call, this year, next year, we will be here for them. Because one thing I know for sure, it’s just my purpose here on this earth—to give back.”

Anyone in the market to buy or sell a home and who works in the Hero fields, law enforcement, military, education, firefighting, and healthcare, are encouraged to call United Realty and Associates at 972-702-4378 (HERO) or visit www.ChrisBrickman.com.

There are many Heroes among us! Are you one of them?

Easy to use tool that will provide you with unlimited access to the most advanced property search in North Texas. Save searches, track your favorite listings, share properties, get email updates with new listings, monitor new listings/price changes and much more...